Cristiano Ronaldo is one of the richest footballers on the planet, and his son Cristiano Ronaldo Jr could soon be earning almost £5,000 per sponsored post on Instagram according to new research.

Cristiano Jr, despite being just nine years old and setting up his profile just 24 hours ago, has amassed almost 1,000,000 followers, which means he could already be earning thousands according to OLBG’s Instafam.

Thanks to his already huge following, brands could pay him £3,227 to promote their content on his Instagram page, and he is just one of a number of child stars who could potentially make a fortune on the back of the success of their parents. 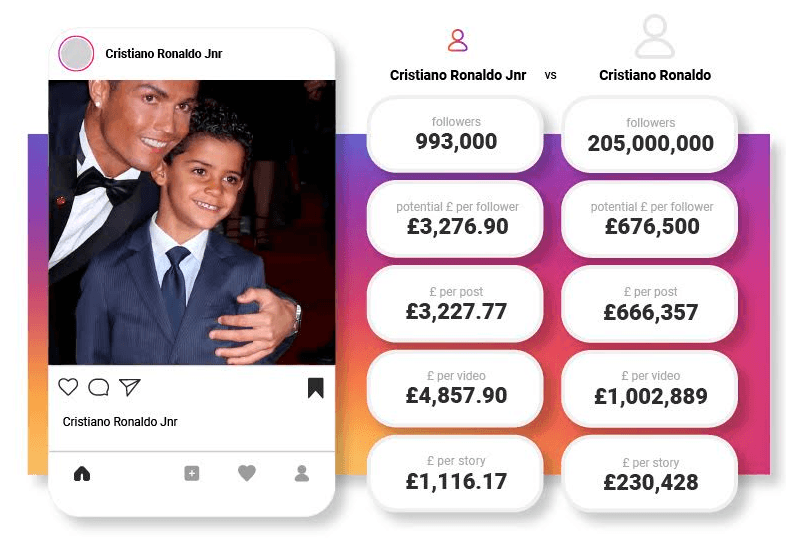 His father is paid a fortune, reported to be well over £500,000 a week to play football, but his massive earning potential off the pitch is almost unparalleled in the footballing world.

The former Real Madrid man has over 205,000,000 followers on his Instagram page, and new research from Instafam shows that for every sponsored post the world famous footballer uploads – DAZN and Nike are just two of his high-profile sponsors – he could earn a massive £666,357 for a post, and £1,002,889 per sponsored video.

LeBron James Jr has the biggest earning potential of the Instafam selection with his 3,400,000 followers, but his are dwarfed by the 52,200,000 following of his dad LeBron James.

Though nowhere near that of Neymar, LeBron could earn an eye-watering €200,134 per sponsored post on his page, or even €301,208 per sponsored video. The basketball star has recently promoted sports nutrition brand Ladder Sport on his feed and also represents Nike, Beats, Coca-Cola and Kia among others.

David Beckham could earn over £193,710 per sponsored post while Serena Williams could bring in almost £39,000 per post despite her standing as one of the greatest tennis players of all time.