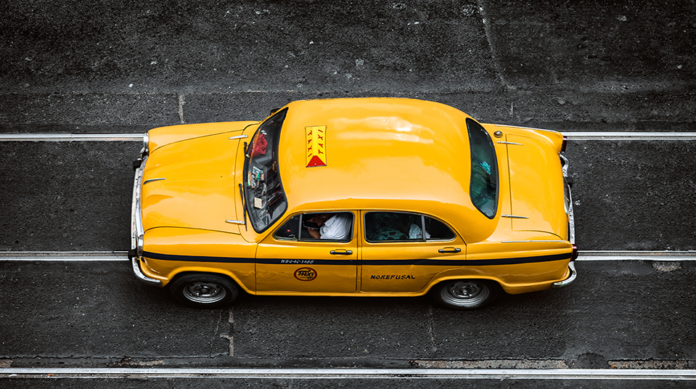 When was the last time you hailed a taxi on the street?

Ride-hailing has become completely digital over the last decade. Taxis are now on apps like Uber, Lyft, Bolt, and they’ve made commuting easy. And it’s not just money we pay for this convenience, but it’s also our data.

Ride-hailing apps collect a lot of information about their users and often share this data with third parties for marketing purposes.

hat’s why our research team has decided to deep-dive into the world of ride-hailing and see which services are the most data-hungry using our data sensitivity index.

Ride-hailing and the data sensitivity index

The index measures how data-hungry ride-hailing apps are using a simple point system. These points were calculated as follows:

Here are the full results using the index:

Our data collection analysis of ride-hailing apps shows that: 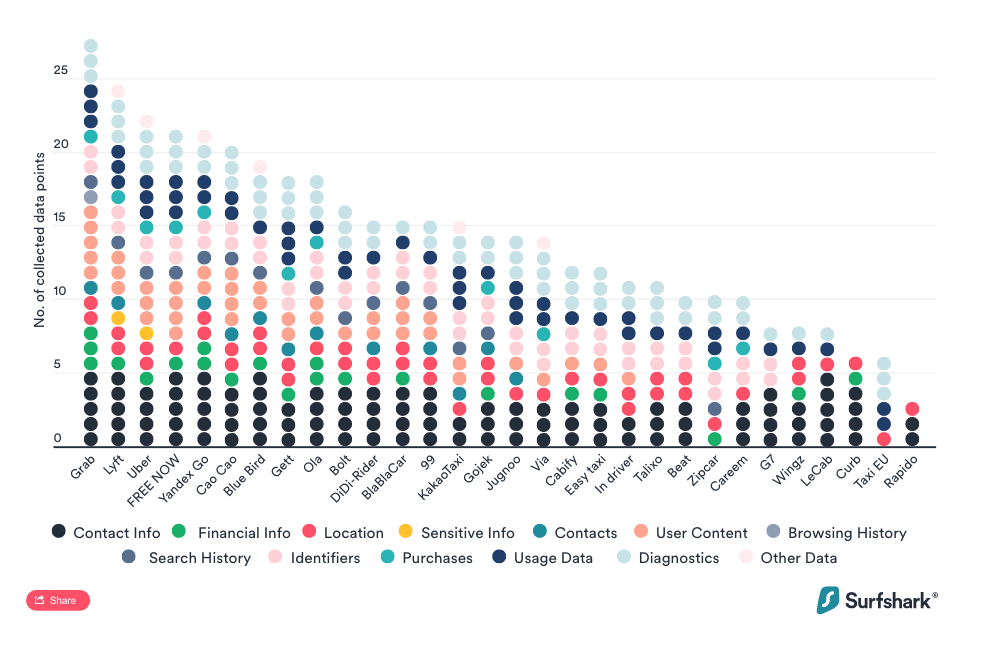 Countries that use data-hungry ride-hailing apps the most

Uber and Lyft might be popular, but they’re not universal. The popularity of these apps varies across regions and different countries. That’s why it’s important to distinguish where people are more exposed to data-hungry apps. Here’s a table that ranks the top 10 most data-hungry apps and which countries they’re popular in:

For the full research material behind this table, feel free to visit here.

The top 3 most data-hungry ride-hailing apps

Out of all the reviewed ride-hailing platforms, GrabTaxi, Yandex Go, and Uber (followed by FREE NOW) stood out as the most data-hungry apps by a large margin. Let’s break the three cases down one by one.

GrabTaxi is the second-most popular app in South-eastern Asia, particularly in countries like Singapore and Vietnam. The service had 68 million unique users in 2018 and an estimated 122 million in 2019.

GrabTaxi collects 27 out of 32 possible data points listed in the Apple Store. The only types of data it doesn’t collect are health & fitness, sensitive information (race, ethnicity, religion, etc.), and gameplay content. The app also shares some of its collected data like product interaction, name, email, phone number, and user ID with third parties.

Yandex Go is most popular around Central Asia and in countries like Kazakhstan, Kyrgyzstan, and Russia. The app collects data such as purchase and search history, precise and course locations, all users’ contact information and identifiers such as user ID and device ID. Yandex Go also has access to their user’s photos, videos, and audio data.

Uber is the most popular ride-hailing app across most of the world. It disrupted the Taxi market with its entry, and somewhere around 2019 had 110 million monthly users in the United States alone.

Just like Yandex Go, Uber collects a lot of the same data points. But it also includes sensitive information.

The app also has access to its users’ videos, photos, texts and emails.

On the other side of the data collection coin, we have apps that barely collect any information. The ride-hailing services least hungry for users’ data are Rapido, Taxi EU, and LeCab.

Rapido is an Indian service that only requires data necessary for the app’s functionality – course location, user’s name and phone number.

Taxi EU is a Taxi service based in Europe. Aside from data that the app requires to function, it collects some analytics data to improve their services like crash, performance, usage, product interaction and similar data.

LeCab is a French Taxi app. Aside from app functionality and analytics data, LeCab also requires a physical address, precise location and email address. While such data is considered private information, its collection is justifiable as it’s also needed for the app to function.

Apps often ask for permissions to access different parts of their user’s device like contacts, microphone, and even camera. This allows them to collect information about their users that they can package and use for extra revenue.

Ride-hailing apps are no different – they collect a lot of user data, and some of them even use it for target ads and marketing products from different companies:

We compared data collected by 30 mobility apps based on the 32 types of data that the Apple Store lists. Apps from the Google Play Store might have different privacy settings.

The index was calculated by assigning the value from 1-3 to each data point by how much it could potentially expose the user:

An app’s popularity was determined by SimilarWeb “Country Rank” data. The higher the rank, the more popular the mobility service is considered to be in a country. Sub-region app popularity was determined by counting the number of countries in the sub-region where the app ranks TOP1 or TOP2 by SimilarWeb “Country Rank” compared to the rest of the analyzed apps.

For the full research material behind this study, feel free to visit here.