February 2020: Deal broking company Latona’s has analysed the Knight Frank Wealth Report archive from the past 5 years to find out where the wealthiest people live, and how much money these high net-worth individuals really have.

The world is full of entrepreneurs, businessmen and women and royalty who all have one thing in common – lots of money. 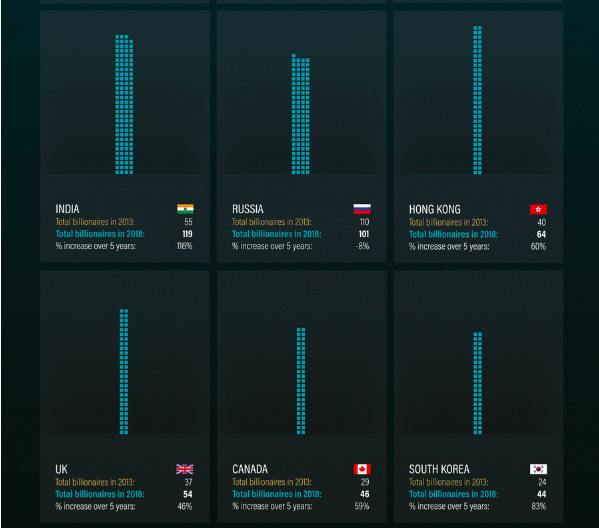 But where do the few who acquire enough wealth to become a billionaire live, and how much money do these ultra-high net-worth individuals really have?

Coming in first place, with a huge 585 billionaires living there, is the USA.

With the likes of Jeff Bezos, Bill Gates and Mark Zuckerberg, totalling a net worth of almost $300 billion, it is no surprise the USA is home to so many high net-worth individuals.

China is home to billionaires such as Jack Ma who’s net-worth soared to $38 billion last year.

The country with the third highest number of billionaire inhabitants is Germany, with 123 total billionaires in the country.

The 11 richest Germans are worth a combined $197 billion. Despite Germany coming in third place, they have under half that of China and less than a third of the billionaires in the USA.

Nevertheless, multi-billionaires such as Georg Schaeffler and Stefan Quandt are amongst the 123 that live in Germany.

Switzerland saw the second-highest percentage increase in billionaires over 5 years at 177%, almost tripling their billionaire residents from 13 in 2013 to 36 in 2018.

The UK is home to only 54 billionaires, including the likes of Sir Jim Ratcliffe, Lord Alan Sugar and Sir James Dyson. The number of billionaires increased over 5 years by 46% from 37 in 2013 to 54 in 2018.

Some countries have seen a decline in the number of billionaires residing there, with Brazil coming bottom seeing a 33% decrease from 46 billionaires in 2013 to 31 in 2018.

“Despite the big countries such as the USA and China taking the top spot, it’s great to see smaller European countries like Germany, Italy and the UK coming in the top 10 countries with the most billionaires, showing them as key places for billionaires to settle and continue to grow their wealth,” says Rick Latona, Director of Latona’s.