Halloween or Hallowe’en or All Hallows’ Eve, or All Saints’ Eve, is a celebration observed in many countries on 31 October.

It was introduced in Europe during the 4th century by the Catholic Church and popularized by the folk customs of the Celtic people of Ireland and Scotland, whereby there would be a lighted bonfire on Hallowmas, All Saints’ Eve, to celebrate and to ask the goddess of the fires, Bêth en Nóis, for protection against the coming winter.

In the past, it was a “triumph of the warrior” and a festival where “children would be rewarded for good behavior and all people would take a healthy rest.”

Hallowe’en was also a time when “young boys were given a small coin (called a jack-o-lantern) by their parents and told to make three circles around it with it, then put the coin in their pocket and hide it in their shoe.”

The modern day tradition of dressing up and trick-or-treating developed from the celebration.

Hallowe’en also started as a celebration of the deaths of an ancient Celtic deity, the Goddess of the Graves, Bêth ‘En Nóis’ – sometimes pronounced Bait in English – sometimes referred to as St. Elsewhere, Mabon, or Saint Eoan.

“Some European traditionists suggest that the religion of the ancient Celts was a polytheistic religion, with several goddesses and spirits co-existing.”

Most of these goddesses were regarded as important or powerful, and the ancient Celts believed that their religions were tied together through the “Virgin Mary.”

Children were often sent to “saints’ shrines to give their allegiance to the various goddesses of Ireland and Scotland.”

As they gathered the offerings for their different goddesses, it was believed that it would protect them during the coming winter.

This whole celebration is part of the pre-Christian Celtic religious tradition.

The movement towards Christianization of the Celtic peoples brought about a slow loss of pre-Christian custom, and modern day Hallowe’en celebrations often only involve the re-imagining of ancient customs.

During the 5th and 6th centuries, Christians added All Saints’ Day to the annual Christian calendar.

The Christian church did not celebrate Halloween, though some, like the Irish Catholic Church, still did.

By the 12th century, however, Halloween was widely celebrated in Catholic countries such as Spain.

In the modern day Hallowe’en or Halloween, may mean only trick-or-treating, an event that comes from the tradition of asking for the life-giving power of the goddess Bêth Nóis from a “holy well” (a Celtic blesser) or from a “Hallow-God.”

Hallowe’en was observed in Ireland in various forms throughout the Middle Ages; the most commonly practiced customs included bonfires to be lit on October 31 and a ritual reenactment of the escape of Christ from the crucifixion, similar to Christian saints’ day celebrations.

It is believed that the celebration was first introduced to the island by the Roman invaders in the 4th century AD, with various local customs (such as bonfires) merging into the holiday.

An old Irish legend claims that the Druids fled to the countryside during the arrival of the English, leaving Hallowe’en traditions behind in the ruins of their sites.

Bonfires were a traditional part of the religious occasion of Samhain, also known as ‘Veneration of the Dead’.

[HR TIPS]: How To Stop Time Card Theft At Your Workplace 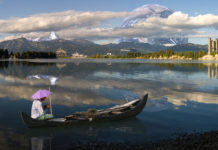 The Tragedy of Fritz Haber: The Monster Who Fed The World