Starting as a Stanford University PhD University research project back in 1995 and launched officially in 1998, Google has emerged two decades later as one of the most successful and recognisable businesses in the world.

Over the last 20 years, Google has acquired enormous success, sitting as the world’s most popular search engine dominating 70% of the search market and holding almost 85% of mobile traffic, it has become the most visited website in the world as a result.

The company is not only considered one of the Big Four technology businesses, alongside the likes of Facebook, Amazon and Apple, it is also one of the most influential and far-reaching companies in the world. 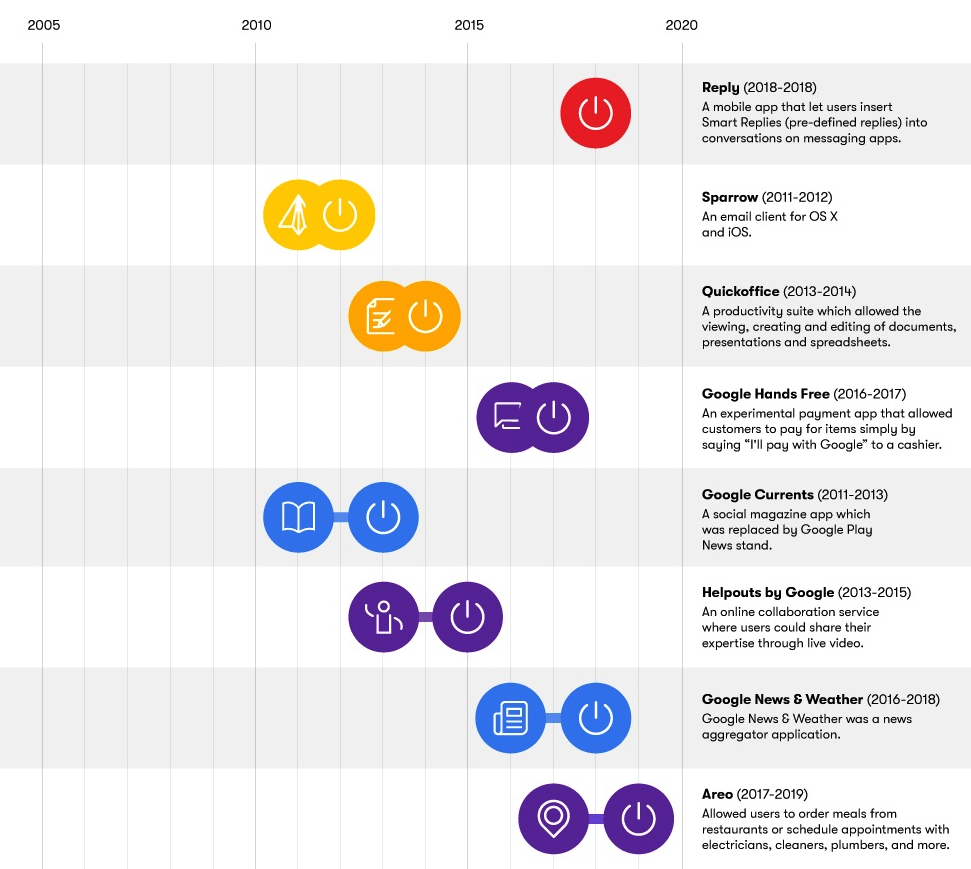 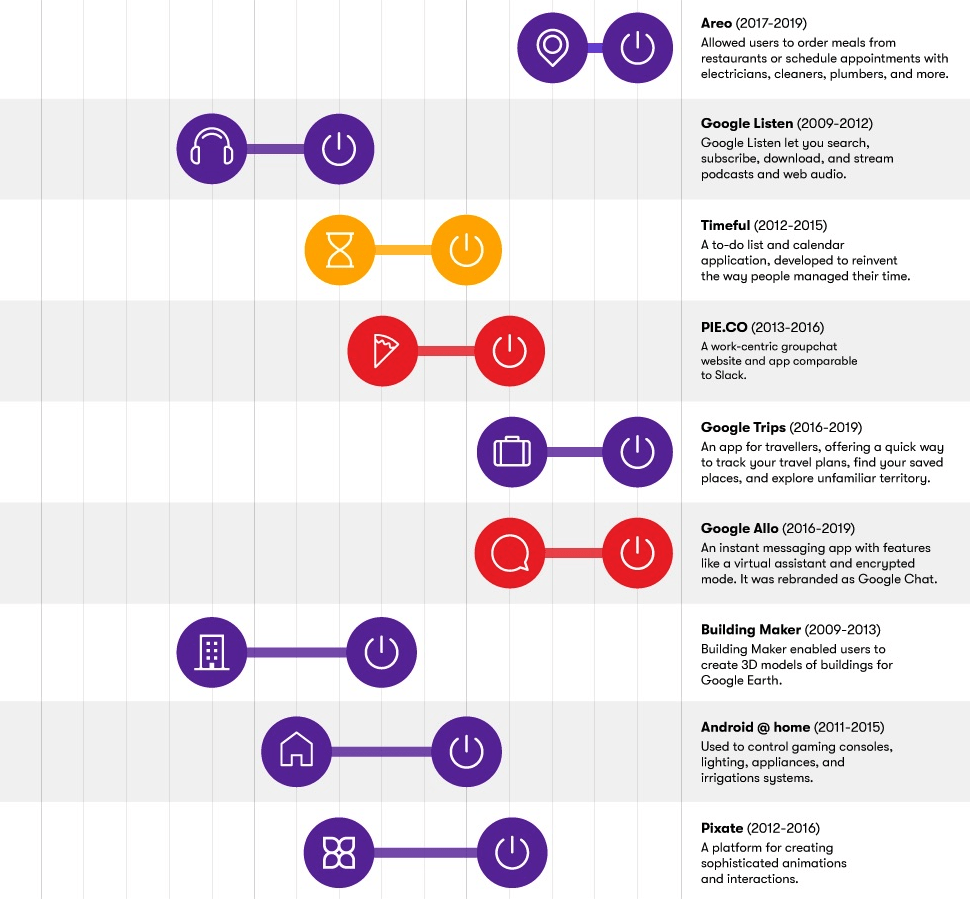 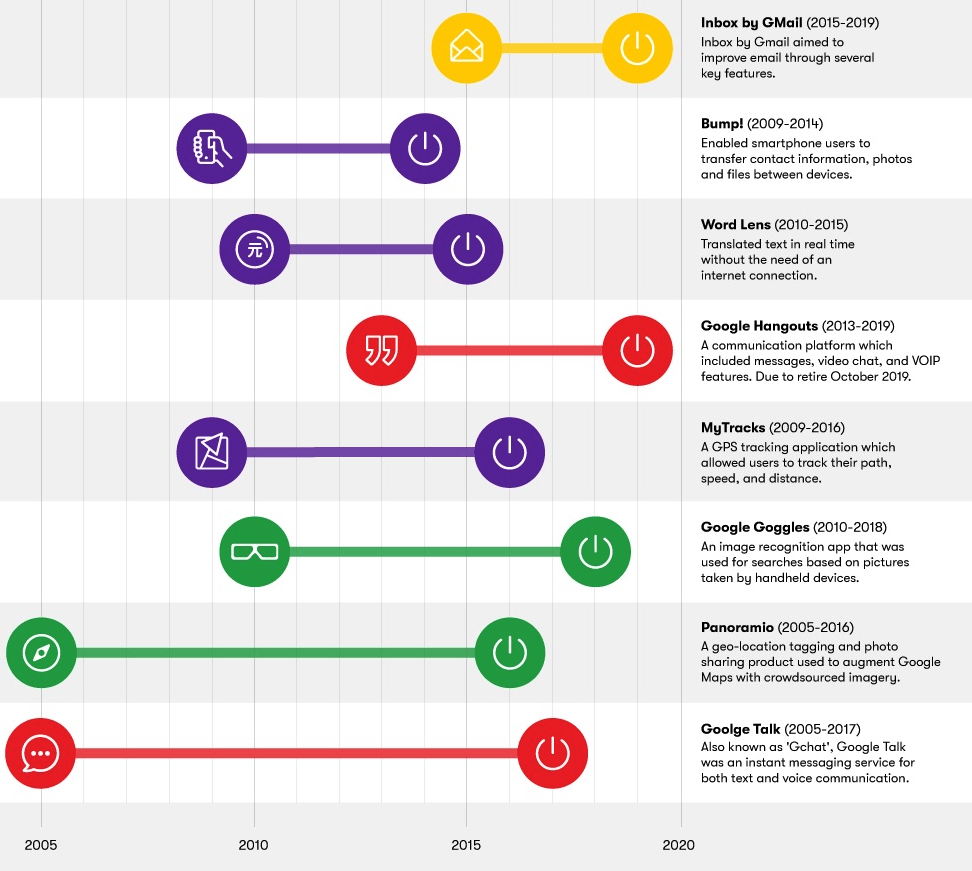 Since its birth, Google is no longer just a search engine but has grown rapidly to produce a chain of products, partnerships and acquisitions across a variety of services and industries.

Some of Google’s most iconic services are designed to aid productivity, with the likes of Google Docs, Sheets, Slides, Gmail, Calendar and Google Drive, which are key tools used by businesses across the world.

But becoming one of the world’s leading tech companies doesn’t come without its failures along the way.

Whilst Google is unafraid of taking risks and exploring new opportunities, this undoubtedly comes with its mistakes and shortcomings when some of their ideas miss the mark.

Google has had incredible success with many of its apps and services, it has also had to close many of them down due to their lack of popularity and pick up.

From introducing a platform used to control home appliances to a social media magazine, these are just a few examples of the failures Google has faced.

RS Components has created a graphic revealing Google’s failed ventures during their journey to success.

With Google Hangouts due to be the next platform set to be sent under, what are the other apps that haven’t picked up for this tech leader?

Google Talk, more commonly known as Gchat, was an instant messaging platform started by the tech giant in 2005 and was designed for both text and voice communication.

This service was immensely popular amongst businesses, who used it as a way to communicate with one another internally in a more informal style.

In 2015, the app began to decline with Google stating the service would stop working for Windows and would be replaced by a new app they’d created, Google Hangouts. Two years later in June 2017, Google Talk was discontinued entirely.

Another of Google’s longest-standing apps was Panoramio. Launched in 2005 and closing 11 years later in 2016, this photo app was used to geo-tag and photo share images to augment Google Maps using crowdsourced pictures.

The main aim of the app was to allow users on Google Earth to learn more about a given area with these additional images of a particular location, and with the website available in several languages, this service sat amongst the top 1,000 most popular websites worldwide in 2009.

Panoramio closed in 2016, however, the layer in Google Earth containing these images remained until 2018.

Google Hangouts was originally a feature of Google+, however, emerged as its own product in 2014 as an integration of the tech giant’s previous apps Google Talk and Google+ Messenger.

The new focus of Hangouts was its audience, as it was built and aimed towards enterprise communication.

This app, however, is now also facing closure, with Google initially declaring its end in October 2019 which has now been postponed to June 2021.

Looking back on some of Google’s app failures, it is clear that this company is not one to shy away from pushing the boundaries and new ideas in order to reach success.

Google’s boldness to move forward despite the failings of some of its apps is a reflection of why it is so successful today, and why it is a key leader of the tech world, with its innovation, and influential, revolutionary ideas driving the 21st century forward.

RS Components is the trading brand of Electrocomponents plc. Started in 1937. The company supplies electronic components; electrical, automation and control, test and measurement equipment; and consumables via e-commerce, catalogues, and trade counters.