However, very few studies have gone deep to research into the causes and effects. This survey intends to fill in the gap.

There’s been a great debate on social media and online forums about stress in the IT sector.

Per usual, various factions emerged, each saying their job was the most stressful. As fascinating as such discussions are, they bring little value to understanding who is the most stressed, how often, and why.

A report that surveyed IT and non-IT professionals to understand the big picture goes into the details and gives insights.

Some strong voices suggested that DevOps is arguably one of the most stressful areas in the IT world.

The survey revealed that DevOps engineers are more frequently stressed than any other group of IT professionals.

Interestingly, the entire IT sector comes across as less stressed than non-IT, where the number of those admitted to feeling stressed often or very often at the level of 55% (compared to 34% for all IT). 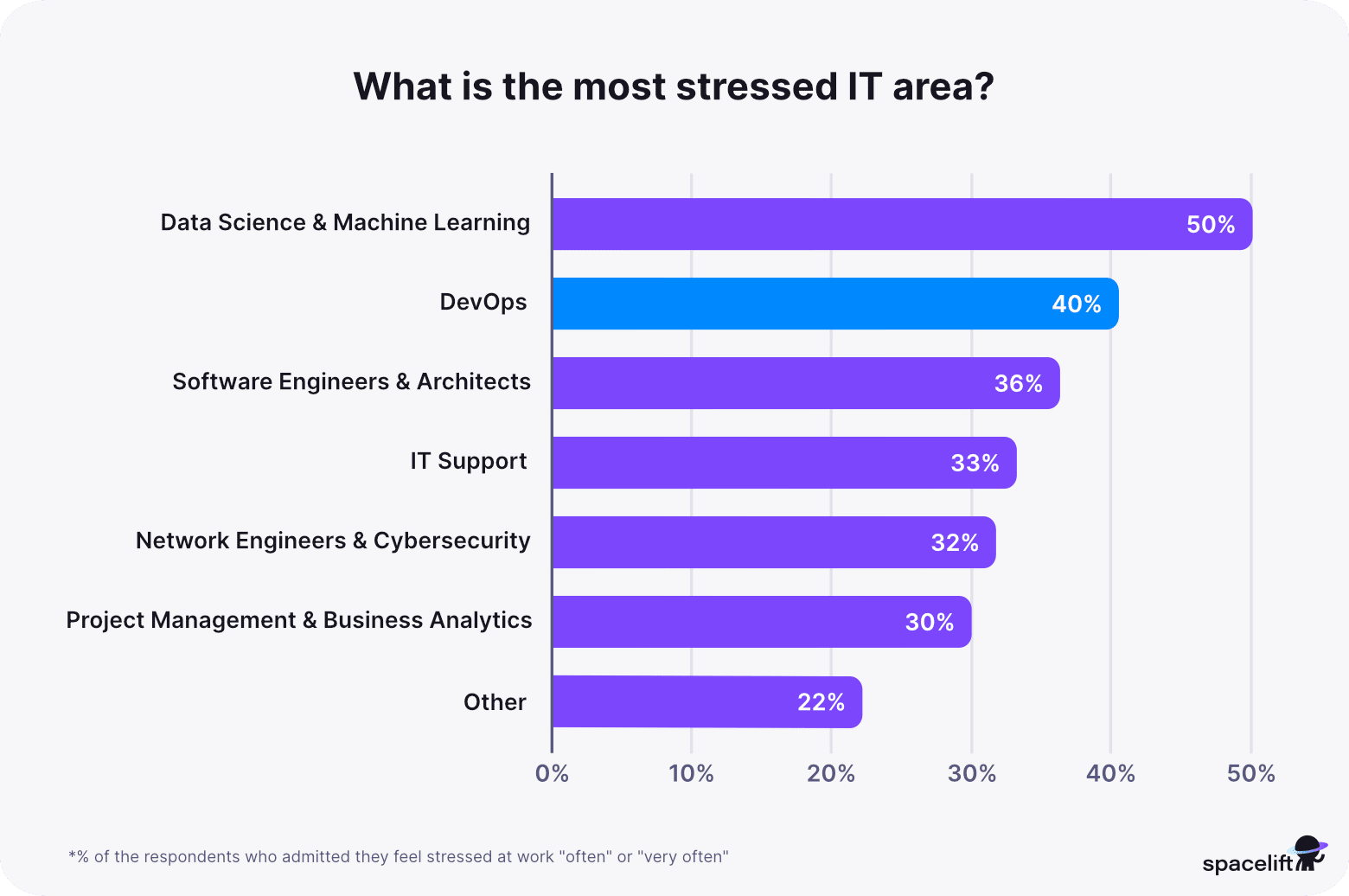 Over 40% of the surveyed DevOps admit to being stressed often or very often. Out of all the IT professionals, 34% admit the same. For non-DevOps IT, the number is about 33%.

The most stressed IT area is Data Science & Machine Learning, with 50% of the surveyed feeling stressed often or very often.

DevOps is the second most stressed IT area. The least stressed are IT Project Management & Business Analytics.

In addition, stress levels are substantially lower for women in the IT sector (35%) than those in non-IT jobs (53%).

The question that arises is what factors contribute to DevOps feeling stressed more frequently.

First, the number of people who have no degree and work in DevOps is higher than in other IT jobs (27% vs. 20% respectively), and they’re 10% more likely to feel stressed. Which means, higher education may reduce the likelihood of feeling stressed in many IT-related professions.

Second, there are about 7.5% fewer individuals with graduate degrees in DevOps than other IT professionals. 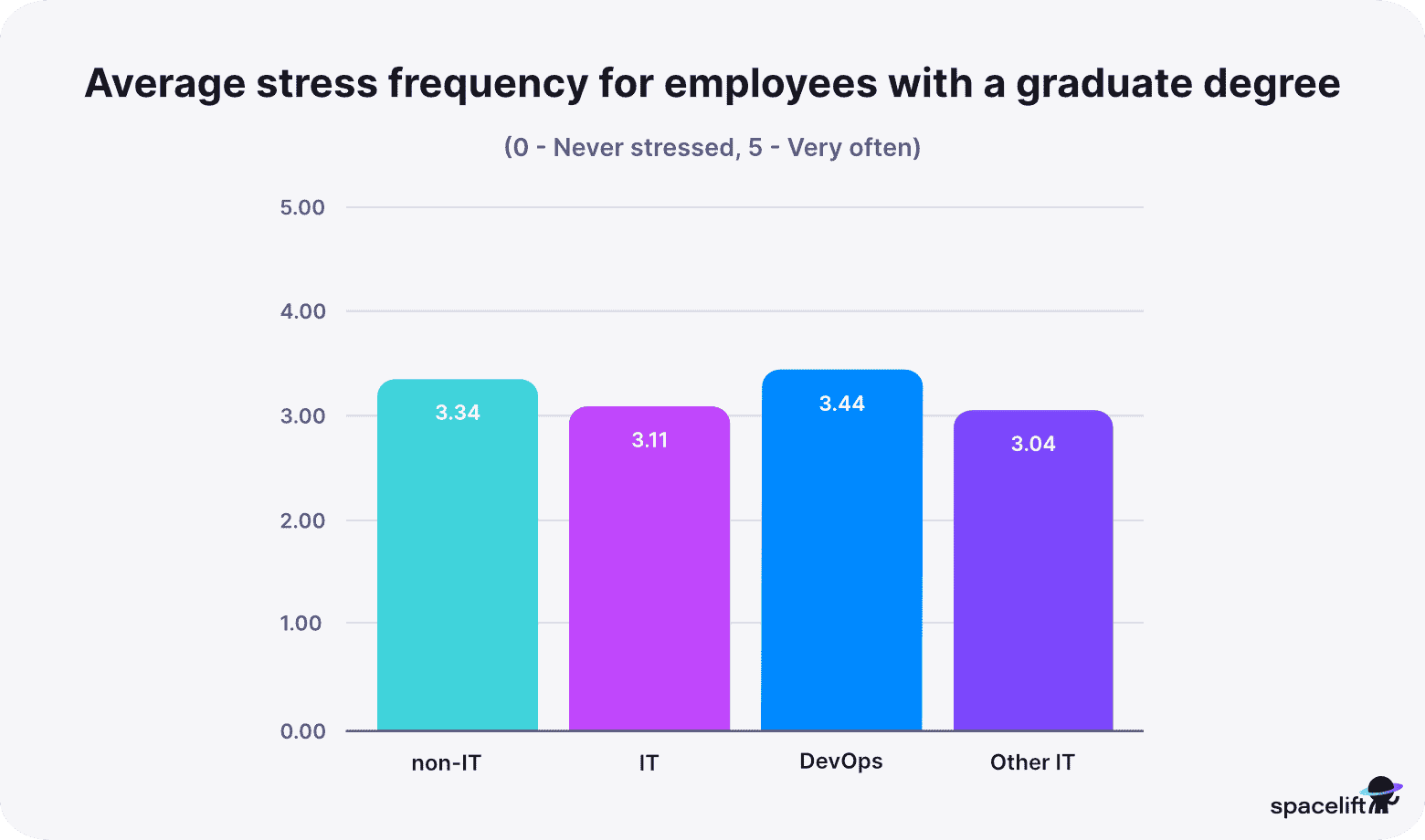 But those who do hold a graduate degree and work as DevOps are the most frequently stressed of all the groups we surveyed, with a stress level score of 3.44 out of 5. Interestingly, those working in the IT sector (excluding DevOps) are the least stressed group (3.04 out of 5).

In terms of salaries themselves, DevOps engineers are more content than the IT average, with as many as 75% of respondents being satisfied (or neutral) with how much they earn (vs. 71% among all IT). Interestingly, a higher percentage of people in the non-IT sector compared to IT and DevOps admitted that they are satisfied with their salaries (50% vs. 43%).

Furthermore, the least earning DevOps engineers (under USD 100k) are on average 7% more frequently stressed than least earning other IT professionals. Therefore, it seems like one of the quickest ways to reduce the frequency of stress among DevOps is to ensure they get paid fairly.

Among our respondents, DevOps engineers took the lead in delivering what was expected of them in the previous month. As high as 65% admitted that they never or rarely had problems with their tasks. In comparison, about 34% of non-IT and 61% of all IT respondents said the same thing.

Suggesting that DevOps is arguably one of the best organized IT areas and DevOps engineers seem to have the most flexibility in managing their workload. Our survey shows that up to 86% of DevOps engineers are free to decide when to take a break during the day. The same is true for about 80% of all IT professionals, and 77% of non-IT professionals.

A similar trend was visible in another question we asked—about having to work on the weekends.

As many as 66% of DevOps engineers admitted they never or rarely work on the weekends. This starkly contrasts with the non-IT sector, where only about 25% of respondents can fully enjoy their Saturdays and Sundays.

Among the other IT (non-DevOps) professionals, only 48% admit this is the case, and 52% of all IT professionals.

However, DevOps managers turn out to be one of the most stressed professional groups in the IT sector.

They are, on average, 14% more frequently stressed than DevOps specialists, which appears normal as the levels of stress increase with growing responsibilities.

But what’s really interesting is that DevOps managers are also 21% more frequently stressed than managers working in the other IT areas.

It may be hard to identify the exact reasons, but it appears like the level of control over their work has nothing to do with it.

As much as 33% of DevOps admitted that in the last month, they “rarely or never” felt that they were on top of things. It’s a high number because only 26% of IT and 15% of non-IT claimed the same.

“DevOps is very stressful. When things go wrong, you’re on the hook to get a resolution quickly. Every minute of downtime is lost revenue,” Paul Delcogliano, VP of Technology at IPX Retirement

DevOps can also appear to be more sensitive to stress regarding how they perceive their work’s value.

With higher salaries, little work on the weekends, and job flexibility, it’s hardly surprising that a high percentage of DevOps engineers would never or rarely consider changing their jobs (39%). For the entire IT sector, this number is even higher (43%).

For starters, we found that about 31% of those working in the entire IT sector missed a workday because of stress. Interestingly, according to the American Institute of Stress, stress causes around 1M US workers to miss work every day.

Now, it’s common knowledge that one of the best ways of dealing with stress is taking time off to recharge the batteries. In fact, researchers from the University of California, San Francisco, proved that a resort vacation boosts your energy levels and positively impacts “molecular networks associated with stress and immune function.” 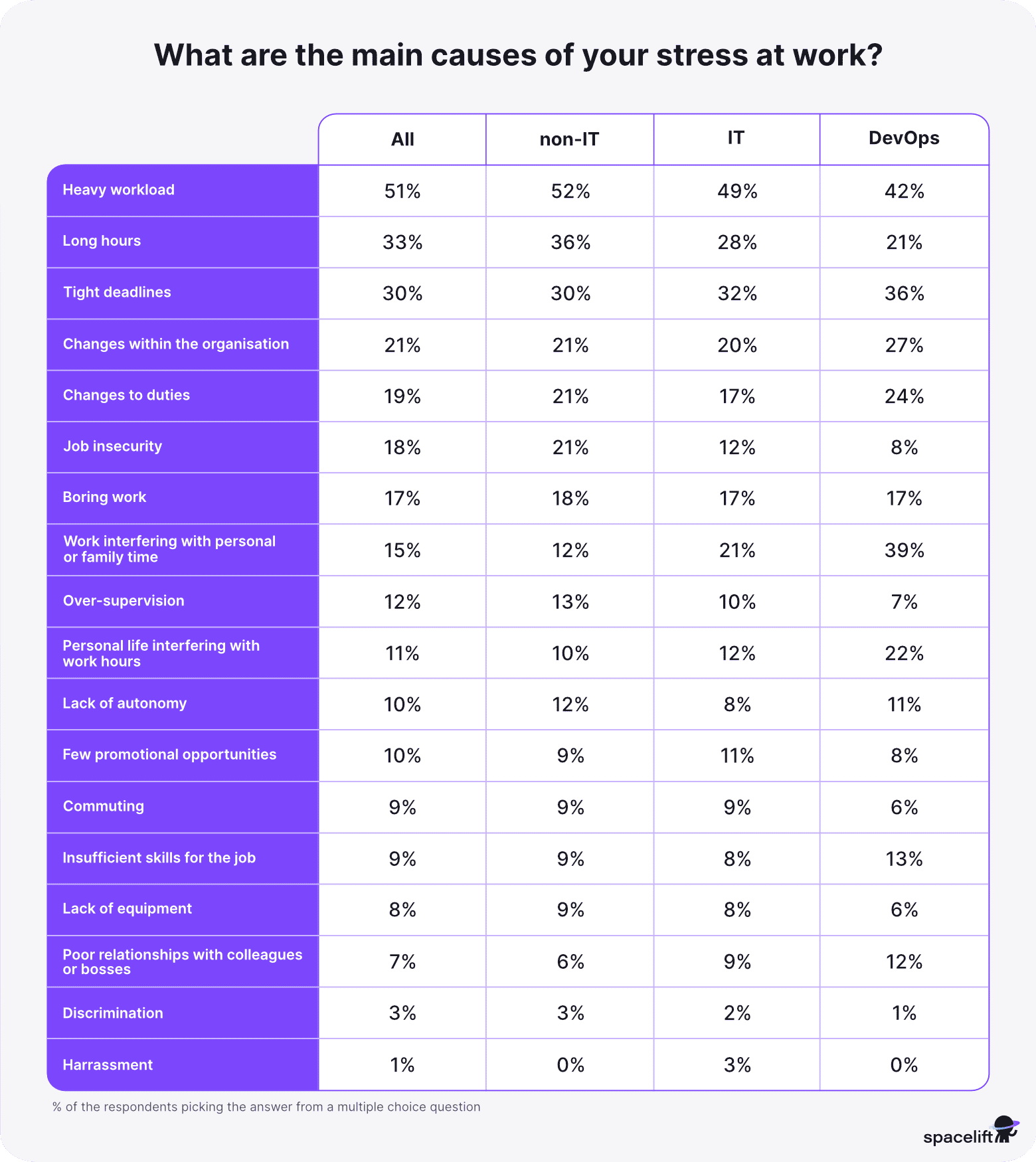 Knowing that DevOps is a more frequently stressed group than other IT pros, it came as no surprise to us to learn DevOps are also the ones who take the most time off. About 72% of DevOps take at least 9 days off per year, which is 16% points more than the IT workers and 37% points more than those employed in the non-IT sectors.

In the non-IT sectors, about 55% of those surveyed skipped a day of work because of stress, 32% for IT non-DevOps, and 31% for the entire IT sector.

APA’s 2020 study identifies the following as the top stressors:

On the other hand, the American Institute of Stress lists these as top causes of workplace stress:

According to the respondents, the top three workplace stressors are:

Even though it may sound obvious, the heavy workload has been universally identified as the top stressor by all the groups we surveyed. In fact, this finding lines up with Statista’s study from 2017 and reveals that not much has changed over the past five years.

When you look at the overall results, DevOps come across as 16% more irritated but 18% less depressed than non-IT professionals.

Namely, DevOps engineers pointed out insufficient skills to do the job as a stress-generating factor more than any other group we surveyed.

Insufficient skills to do the job as a stressor

Here’s what the numbers look like for the same symptoms among the participants in our study:

Overall, DevOps engineers accounted for the largest percentage in four out of eleven stress symptoms.

DevOps engineers are also the largest group whose members don’t know whether or not their organizations provide mental health support (29%). Plus, the smallest percentage of this professional group works in companies that do provide such programs (37%).

DevOps professionals are also the most solitary group as they avoid friends and family (as a coping strategy) over 20% more often than other IT professionals.

In terms of the so-called positive ways of dealing with stress, DevOps also differ from the other groups. 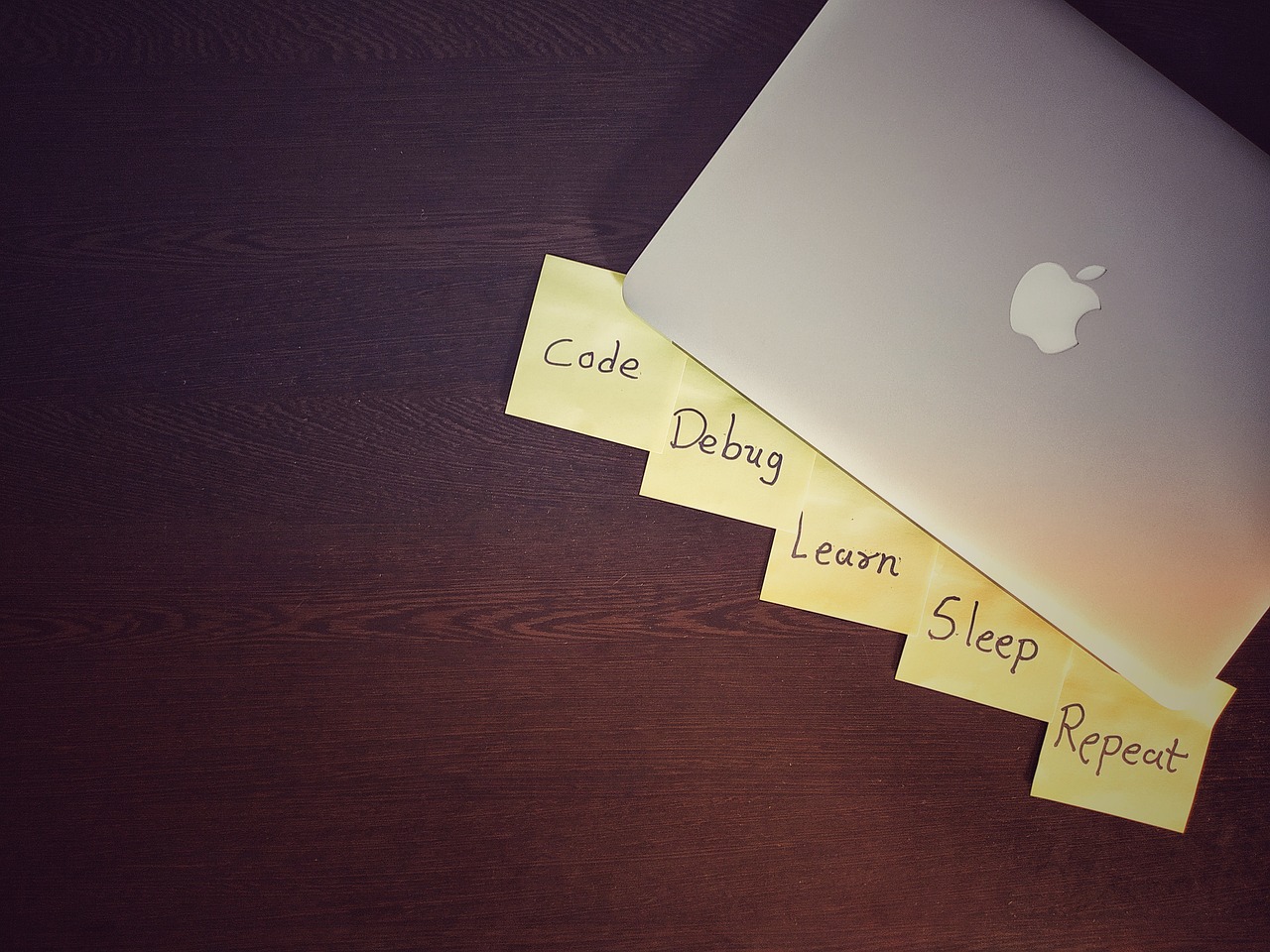 While the most popular way to cope with stress across the IT and non-IT sectors is listening to music and exercising, as many as 62% of DevOps choose to play video games as the #1 stress-relieving activity.

In addition, DevOps enjoy exercising and getting outdoors at least 19% points more than other groups. Moreover, DevOps laugh or cry at least 7% points less frequently than others as a way to cope with stress.

“My way of dealing with stress at work is to define objectives and goals as it helps me stay focused on achieving them rather than getting digressed by minor details. Another way is to introduce a healthy lifestyle and keep a positivity induced mindset, that requires one to be very empathetic towards others,” – Ali Abbas Jaffri, Machine Learning Engineer at ML Reply

“I found having hobbies unrelated to IT necessary to reduce work-related stress. For example, I ride a bike and travel and often go hiking – a change of scenery helps a lot. What’s more, understanding that there are many external factors and inevitable incidents related to those factors that you can’t influence is crucial to keep the mind at ease. – Kirill Kotov,” Head of Integration and Automation Department at ASAP Lab Ltd.

The survey was conducted online via Centiment, Reddit, and Amazon mTurk on 1142 respondents from the United States.

Respondents consisted of 57% males and 43% females. The survey comprised 29 questions—mostly based on the Likert scale and multiple-choice.

(Published as part of a content partnership. First published here at Spacelift.) 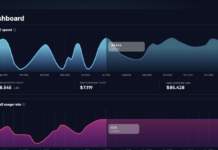 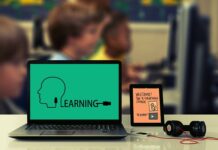 How To Stem The Coding Skills Gap From A Young Age 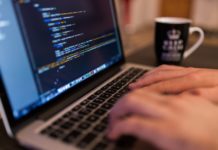 CODING: Why You Should Learn Python Programming In 2022