5G is taking its first steps in the market, however it still has a long road ahead before the majority of users can start reaping its benefits.

Currently, the fifth-gen network is driven by the East: South Korea, which deployed 5G services in early last April, and China, leading the industry with one of the world’s largest‘ 5G networks, as well as being the most advanced in terms of manufacturing the necessary tech to support it.

Before a truly widespread rollout, all major carriers have to address a number of challenges.

That said, the current disagreements among some of the leading market players make it impossible to guess who will be able to tackle these problems first. With the UK’s 5G implementation progress hindered by the recent Huawei ban, and the US pushing its innovators to find alternatives for the Chinese tech giant, the matter becomes more of guessing game, even though most of the predictions revolve around the year 2025.

Nevertheless, all of them have to deal with the same 5G implementation intricacies to achieve a widespread rollout, which, first of all, is the question of infrastructure size.

5G relies on 4G to travel across long distances, however, to achieve its zero-latency speeds, it utilizes millimeter waves, able to support massive streams of data.

The problem is, they max out at a few hundred meters and find it unable to penetrate such trivial obstacles, such as walls.

This can be solved by building a new network of small cells, spanning across entire cities, each of them covering a tiny area with mmWaves.

This requires not only a great deal of time, but also specific technical knowledge, as well as quite an investment, which is not what every venture can easily afford to pursue. The rollout could progress faster, if industry-leading tech giants were open to collaboration.

Current disagreements in the market hinders taking giant leaps of progress, and will have its share of influence in the end cost. One thing’s for sure – the market is still steadily moving forward with 5G, but the circumstances at hand make you wonder, if it could be achieved faster.

The fifth-gen comes with a brand-new capacity for copious amounts of data handling, raising the need for faster information processing.

Granted, they may need to look into some serious upgrades towards their bare-metal and other next-gen equipment. However, this responsibility comes with a lot of opportunities for scaling and revenue growth too.

5G has already painted quite a pretty picture of the future we ought to expect.

Even though there are still mountains to climb for it to be ready-to-use, that does not make the prospects of self-driving cars and tens-of-gigabytes per second downloads any less exciting. 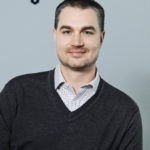 Vincentas Grinius is currently the CEO and one of the co-founders at Heficed, which is solving the IPv4 shortage problem. Vincentas has 10+ years of experience combining today’s technologies and making Heficed the first in the market IPv4 lease and monetization platform – the IP Address Market.